October 24, 2018 – Feeding Artists in rural Maine turns chef’s dream into reality, Portland Press Herald
“Marilou Ranta, EMCC Culinary Arts Alumni, makes a deal with the Libra Foundation’s arts residency program in Monson to fulfill her goal of opening a restaurant….in 2015, she took a big step closer [to owning a restaurant] when she enrolled at Eastern Maine Community College in Bangor to study culinary arts. to get to school she had to drive an hour and a half each way…Ranta persevered and two years later earned her culinary degree. As a student Ranta was ‘second to none’ according to Jay Demers, Culinary Arts department co-chair and one of her professors. A friend of Ranta’s, said she is ‘one of the most creative-and determined – women I’ve ever known. If she sets her mind to it, she does it.'” 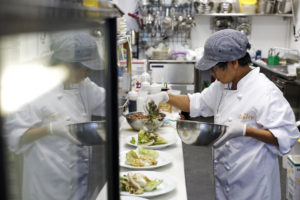